It’s all about defense right now for Arizona State women’s basketball because early on the offense resembles a turkey gone wrong on Thanksgiving. 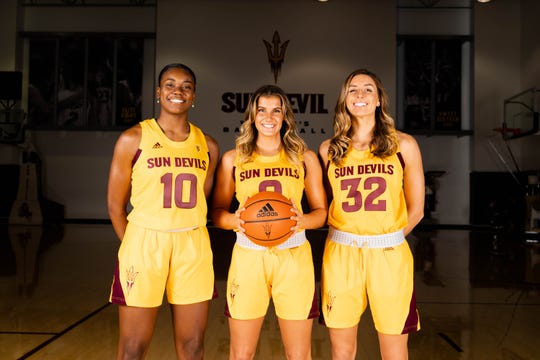 For a decade and a half when Arizona State women’s basketball needs to reload, it almost always finds a way.

Whether it’s thanks to players ready to contribute after waiting for their turn or talented freshmen coming along at just the right time, ASU continues to pass the baton from one 20-win season to another. Fourteen in all over the last 16 seasons including a current school record of seven straight.

Now with the loss of five seniors, four of them starters, the Sun Devils again are at a crossroads. A significant enough one that they’ll likely need returners and newcomers to come up big for them to remain in the top half of the still loaded Pac-12.

“I do think we develop our players, they get better,” ASU coach Charli Turner Thorne said. “We coach everybody hard from the day they get here and we look for opportunities to play people as soon as they get here, even if it means winning by a few less points. That just naturally allows for great development, and that’s what we’re seeing right now in this junior class.”

There are four returning juniors and a junior college transfer starting her ASU career. Forward Jayde Van Hyfte started every game as a sophomore and guard Taya Hanson made 12 starts to cover for injuries. Turner Thorne is banking on those two and guard Iris Mbulito stepping up to fill the experience gap left by departures of guards Reili Richardson, Robbi Ryan and Kiara Russell and posts Jamie Ruden and Ja’Tavia Tapley.

The outgoing players combined for 68 percent of ASU’s scoring in 2019-20, 47 percent of rebounds and 62 percent of assists.

Van Hyfte has been rehabbing from meniscus surgery in April, her third knee surgery in all dating back to high school days in Annawan, Illinois. She recently had a platelet-rich plasma injection to alleviate pain and despite being limited in practice hopes to be ready for the season opener Nov. 25.

“We’ve worked very hard these last two years and learned a lot from the upperclassmen who were the leaders of our team, and hopefully we can all step into bigger roles this year,” Van Hyfte said. “I believe in my fellow classmates and myself.”

Mbulito also had a recovery summer after breaking her leg and injuring an ankle falling off a skateboard. She is back at full practice and projected to be a perimeter starter along with Hanson and freshman Jaddan Simmons.

“This wasn’t my first time skateboarding, it was my first time using a longboard,” Mbulito said. “I just had bad luck because the longboard hit a little rut and I wasn’t ready for that then I fell and it was really bad. After that one, I probably won’t do it ever 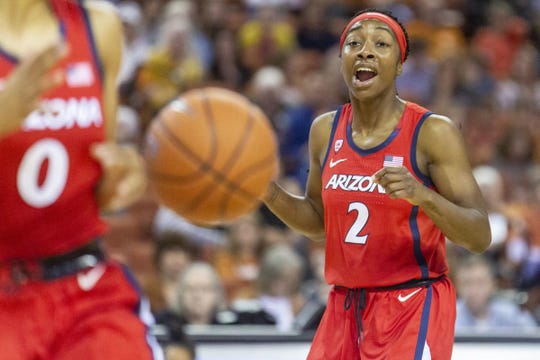 Arizona women’s basketball is ranked No. 7 in the Associated Press preseason poll, its highest preseason ranking and tied for its highest ranking ever.

The Wildcats previous preseason high was No. 15 in 1997-98 when they also reached their overall AP poll high of No. 7.

UA was 24-7 in 2019-20 and ranked No. 12 in the final AP and coaches polls. Returners include two-time All-America guard Aari McDonald and forwards Cate Reese and Sam Thomas. Coach Adia Barnes also has substantial additions including transfers Trinity Baptiste (from Virginia Tech) and Bendu Yeaney (Indiana).

Arizona State, coming off a seventh consecutive 20-win season, and USC are among others receiving votes.

South Carolina is ranked No. 1 preseason for the first time. Others in the top 10 are Connecticut No. 3, Baylor No. 4, Louisville No. 5, Mississippi State No. 6, and North Carolina State No. 8.

The women’s basketball season begins Nov. 25 and the 22-game Pac-12 season on Dec. 4 with UA opening against UCLA and ASU vs. USC.

Former Arizona Wildcats quarterback Khaili Tate has started a clothing line and ASU fans are not happy about it.

A link has been sent to your friend’s email address.

A link has been posted to your Facebook feed. 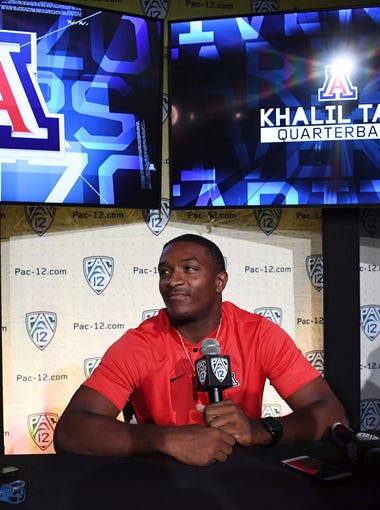 Arizona QB Khalil Tate on the cover of Sports Illustrated.

Arizona Wildcats quarterback Khalil Tate (14) signals to the crowd during the first half against the Washington State Cougars at Arizona Stadium.

Arizona Wildcats quarterback Khalil Tate prior to the game against the Arizona State Sun Devils during the Territorial Cup at Sun Devil Stadium.

Arizona Wildcats quarterback Khalil Tate (14) rushes with the football against the Purdue Boilermakers during the second half in the 2017 Foster Farms Bowl at Levi’s Stadium.

Former Arizona Wildcats quarterback Khaili Tate has started a clothing line and Arizona State fans are not happy about it.

Earlier this month, Tate, who had some very